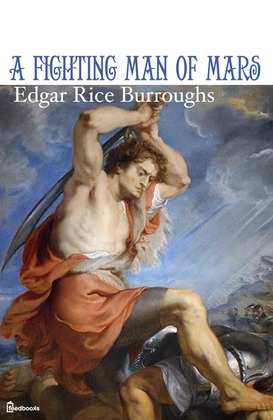 A Fighting Man of Mars

A Fighting Man of Mars is an Edgar Rice Burroughs science fiction novel, the seventh of his famous Barsoom series. Burroughs began writing it on February 28, 1929, and the finished story was first published in Blue Book Magazine as a six-part serial in the issues for April to September, 1930. It was later published as a complete novel by Metropolitan in May, 1931.
The story is purportedly relayed back to earth via the Gridley Wave, a sort of super radio frequency previously introduced in Tanar of Pellucidar, the third of Burrough's Pellucidar novels, which thus provides a link between the two series. The story-teller is Ulysses Paxton, protagonist of the previous novel, The Master Mind of Mars, but this story is not about him; rather, it is the tale of Tan Hadron of Hastor, a lowly, poor padwar (a low-ranking officer) who is in love with the beautiful, haughty Sanoma Tora, daughter of Tor Hatan, a minor but rich noble. As he is only a padwar, Sanoma spurns him. Then Sanoma Tora is kidnapped, and the novel moves into high gear.
(From Wikipedia)