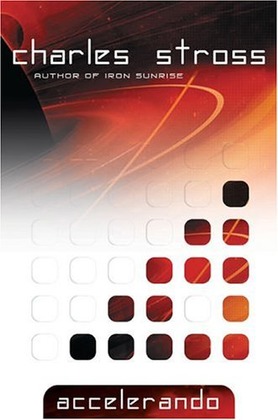 The book is a collection of nine short stories telling the tale of three generations of a highly dysfunctional family before, during, and after a technological singularity. It was originally written as a series of novelettes and novellas, all published in Asimov's Science Fiction magazine in the period 2001 to 2004.
The first three stories follow the character of "venture altruist" Manfred Macx starting in the early 21st Century, the second three stories follow his daughter Amber, and the final three focus largely on her son Sirhan in the completely transformed world at the end of the century.
According to Stross, the initial inspiration for the stories was his experience working as a programmer for a high-growth company during the dot-com boom of the 1990s.