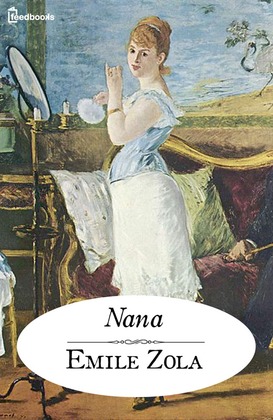 Nana is a novel by the French naturalist author Émile Zola. Completed in 1880, Nana is the ninth installment in the 20-volume Les Rougon-Macquart series, which was to tell "The Natural and Social History of a Family under the Second Empire."

The novel was an immediate success. Le Voltaire, the French newspaper that was to publish it in installments from October 1879 on, had launched a gigantic advertising campaign, raising the curiosity of the reading public to a fever pitch. When Charpentier finally published Nana in book form in February 1880, the first edition of 55,000 copies was sold out in one day. Flaubert and Edmond de Goncourt were full of praise for Nana. On the other hand, a part of the non-reading public, spurred on by some critics, reacted to the book with outrage. While the novel is held up as a fine example of writing, it is not especially true to Zola's touted naturalist philosophy; instead, it is one of the most symbolically complex of his novels, setting it apart from the earthy "realism" of L'Assommoir or the more brutal "realism" of La Terre (1887). However, it was a great deal more authentic than most contemporary novels about the demimonde.

Nana is especially noted for the crowd scenes, of which there are many, in which Zola proves himself a master of capturing the incredible variety of people. Whereas in his other novels -- notably Germinal (1885) -- he gives the reader an amazingly complete picture of surroundings and the lives of characters, from the first scene we are to understand that this novel treads new ground.

Flaubert summed up the novel in one perfect sentence: