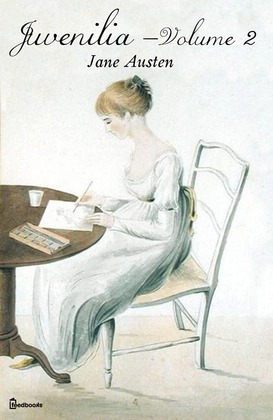 Perhaps as early as 1787, Austen began to write poems, stories, and plays for her own and her family's amusement. Austen later compiled "fair copies" these early works into three bound notebooks, now referred to as the "Juvenilia," containing pieces originally written between 1787 and 1793. (from Wikipedia)
.
The 2nd volume of juvenilia includes:
* Love and Freindship
* Lesley Castle
* The History of England
* A Collection of Letters
* Scraps (The Female Philosopher, The First Act of a Comedy, A Letter from a Young Lady, A Tour through Wales, A Tale)
.
Cover image:
Back View of Jane Austen, Watercolor
by Cassandra Austen
from http://en.wikipedia.org/wiki/File:CassandraAusten-JaneAustenBackView%281804%29.jpg