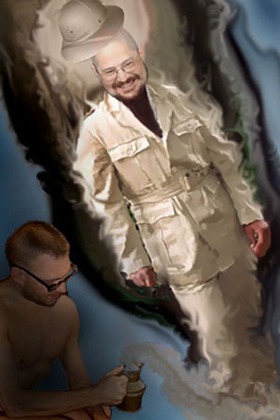 Welcome to the fractured future, at the dusk of the twenty-first century.

Earth has a population of roughly a billion hominids. For the most part, they are happy with their lot, living in a preserve at the bottom of a gravity well. Those who are unhappy have emigrated, joining one or another of the swarming densethinker clades that fog the inner solar system with a dust of molecular machinery so thick that it obscures the sun. Except for the solitary lighthouse beam that perpetually tracks the Earth in its orbit, the system from outside resembles a spherical fogbank radiating in the infrared spectrum; a matrioshka brain, nested Dyson orbitals built from the dismantled bones of moons and planets.

The splintery metaconsciousness of the solar-system has largely sworn off its pre-post-human cousins dirtside, but its minds sometimes wander nostalgiawise. When that happens, it casually spams Earth's RF spectrum with plans for cataclysmically disruptive technologies that emulsify whole industries, cultures, and spiritual systems.

Whether the enlightened, occulting smartcloud sends out its missives as pranks, poison or care-packages is up for debate. Asking it to explain its motives is roughly as pointful as negotiating with an ant colony to get it to abandon your kitchen. Whatever the motive, humanity would be much better off if the Cloud would evolve into something so smart as to be uninterested in communicating with meatpeople.

But until that happy day, there's the tech jury service: defending the earth from the scum of the post-singularity patent office.