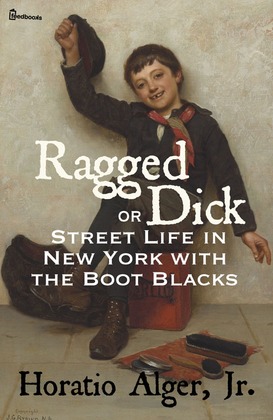 Ragged Dick; or, Street Life in New York with the Boot Blacks

by Horatio Alger, Jr. (Author)
Excerpt
Fiction Action & adventure
warning_amber
One or more licenses for this book have been acquired by your organisation details

Ragged Dick; or, Street Life in New York with the Boot Blacks is a Bildungsroman by Horatio Alger, Jr. serialized in Student and Schoolmate in 1867, and released as a full length novel in May 1868 by A. K. Loring. It was the first volume in the six volume Ragged Dick Series, and became Alger's all-time bestseller. The tale follows a poor boot black's rise to middle class respectability in 19th-century New York City. It had a favorable reception. Student and Schoolmate reported their readers were delighted with the first installment and Putnam's Magazine thought boys would love the novel. One modern scholar considers the story a "puerile fantasy" about class assimilation. The plot and theme were repeated virtually in toto in Alger's subsequent novels and became the grist for parodists and satirists. Ragged Dick and Alger's Silas Snobden's Office Boy inspired the musical comedy Shine! in 1982.