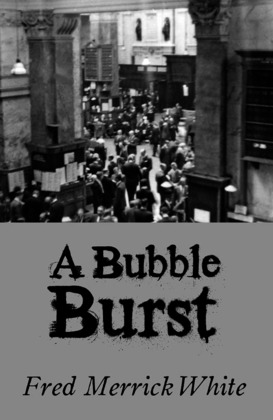 How a Stock Exchange Scare Dislocated the Life of the Empire For Two Days, a story in the "Doom of London" series in which the author sounds the clarion call of potential disasters that my befall the great city. Here, it is the tale of an investment "bubble", an irrational exuberance for buying shares of South African gold mining stocks. Excerpts:

"From the highest to the lowest everybody was investing their savings in South Africa. ... In other words, there was a tremendous 'boom.' Nothing like it had ever been seen in the history of commerce. It was the golden hour of the promoter. Yet, for the most part, the schemes promised well. There was, however, an enormous amount of rubbish on the market. Some of the more thoughtful financiers scented danger ahead, but they were not listened to.

"All England was in the grip of the mania. Bona fide speculation and business had become gambling pure and simple. London thought of nothing else. The City was crammed with excited buyers and operators...."

Then a cable telegram arrives from South Africa at one London newspaper office, saying that a tremendous earthquake has destroyed the Johannesburg water system and flooded the gold mines. The undersea cables from South Africa then broke down after the message was received, so no further messages could be sent or received to confirm or to learn more. The newspaper publishes the exclusive news. Investors panic and sell their shares at any price before they are ruined by plunging values. But is it true, or a fraud? -- a market manipulation?