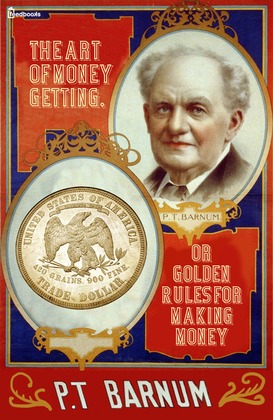 The Art of Money Getting, or Golden Rules for Making Money

by P. T. Barnum (Author)
Excerpt
Nonfiction Business & economics Free Enterprise
warning_amber
One or more licenses for this book have been acquired by your organisation details

P. T. Barnum, the great American showman of the 19th century, wrote this short book about making and keeping money. He certainly had life experiences that qualify him for the subject--he started a small newspaper in his twenties, bought and transformed a museum into a showplace for curiosities, built a circus empire that gave performances in America and Europe, promoted a performing tour of a singer, fell into debt in the 1850s and pulled himself out by lecture tours, was a mayor, and founded a hospital.

"Those who really desire to attain an independence, have only to set their minds upon it, and adopt the proper means, as they do in regard to any other object which they wish to accomplish, and the thing is easily done. But however easy it may be found to make money, I have no doubt many of my hearers will agree it is the most difficult thing in the world to keep it. ... True economy consists in always making the income exceed the out-go."

"Unless a man enters upon the vocation intended for him by nature, and best suited to his peculiar genius, he cannot succeed. I am glad to believe that the majority of persons do find their right vocation. Yet we see many who have mistaken their calling..."

His advice is indicated by the chapter titles:

WHATEVER YOU DO, DO IT WITH ALL YOUR MIGHT,

USE THE BEST TOOLS,

DON'T GET ABOVE YOUR BUSINESS,

LET HOPE PREDOMINATE, BUT BE NOT TOO VISIONARY,

DO NOT SCATTER YOUR POWERS,

BEWARE OF "OUTSIDE OPERATIONS",

"DON'T READ THE OTHER SIDE",

BE POLITE AND KIND TO YOUR CUSTOMERS,