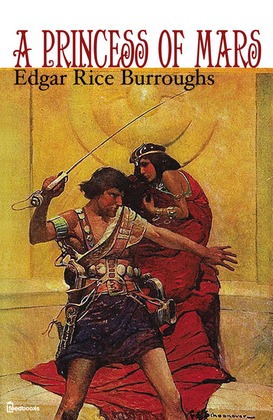 A Princess of Mars

A Princess of Mars is an Edgar Rice Burroughs science fiction novel, the first of his famous Barsoom series. It is also Burroughs' first novel, predating his Tarzan stories. He wrote it between July and September 28, 1911, going through four working titles; initially, he was going to call it My First Adventure on Mars, then The Green Martians, Dejah Thoris, Martian Princess, and finally Under the Moons of Mars.
The finished story was first published under the last of these titles in All-Story as a six-part serial in the issues for February-July 1912. For the serial publication, the author's name was given as "Norman Bean"; Burroughs had chosen the pseudonym of "Normal Bean" as a type of pun stressing that he was in his right mind, being concerned he might suffer ridicule for writing such a fantastic story. The effect was spoiled when a typesetter changed "Normal" to "Norman" on the assumption that the former was a typographical error. The story was later published as a complete novel under the present title by A. C. McClurg in October 1917.
Full of swordplay and daring feats, the story is considered a classic example of 20th century pulp fiction.