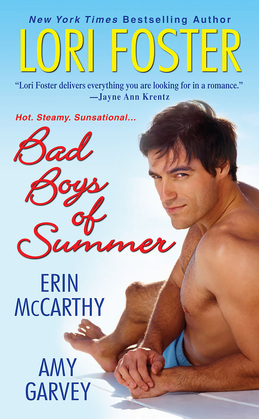 by Lori Foster (Author), Erin McCarthy (Author), Amy Garvey (Author)
Buy for $11.90 Excerpt
Fiction Romance Contemporary
warning_amber
One or more licenses for this book have been acquired by your organisation details

Lazy days . . . steamy nights . . . and sweltering guys with rippling muscles doing what they do best . . .

Bethany Churchill just quit her lousy job, dumped her lousy boyfriend and moved into a new apartment. She's not looking for love, but her hot new landlord is determined to change her mind. SWAT officer Lucius Ryder--known to the women in the building as "Luscious," much to his chagrin--is one sexy lawman, and before long Bethany is tempted to find out if he's really as delicious as his nickname. . .


It's About Time by Erin McCarthy

County prosecutor Trish Jones has had it with smooth-talking, under-performing suits. And though she's never had a thing for big, brawny guys, one look at Caleb Vancouver's bulges makes her think she might have been missing out. One Harley ride later they're back at her place, and she realizes that she has been missing out . . . on quite a lot . . .


Wish You Were Here by Amy Garvey

Photographer Mackenzie Pruitt knows exactly what she wants her future to look like, and this summer that means renovating a dilapidated shed into a studio. But when hunky carpenter Leo Dawson shows up, she'd much rather have his capable hands on her than on a hammer. He's not the kind of guy she always thought she'd fall for, but when he touches her, she can't imagine wanting anyone else . . .