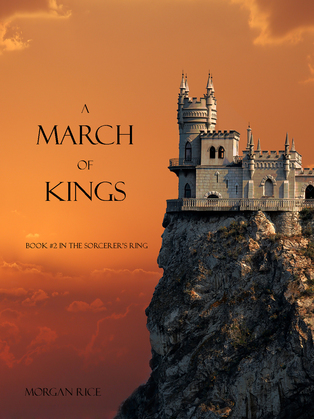 A March of Kings (Book #2 in the Sorcerer's Ring)

THE SORCERERS RING has all the ingredients for an instant success: plots, counterplots, mystery, valiant knights, and blossoming relationships replete with broken hearts, deception and betrayal. It will keep you entertained for hours, and will satisfy all ages. Recommended for the permanent library of all fantasy readers.
--Books and Movie Reviews, Roberto Mattos

A MARCH OF KINGS is Book #2 in the Bestselling series THE SORCERER'S RING, following A QUEST OF HEROES (BOOK #1).

A MARCH OF KINGS takes us one step further on Thors epic journey into manhood, as he begins to realize more about who he is, what his powers are, and as he embarks to become a warrior.

After he escapes from the dungeon, Thor is horrified to learn of another assassination attempt on King MacGil. When MacGil dies, the kingdom is set into turmoil. As everyone vies for the throne, Kings Court is more rife than ever with its family dramas, power struggles, ambitions, jealousy, violence and betrayal. An heir must be chosen from among the children, and the ancient Dynasty Sword, the source of all their power, will have a chance to be wielded by someone new. But all this might be upended: the murder weapon is recovered, and the noose tightens on finding the assassin. Simultaneously, the MacGils face a new threat by the McClouds, who are set to attack again from within the Ring.

Thor fights to win back Gwendolyns love, but there may not be time: he is told to pack up, to prepare with his brothers in arms for The Hundred, a hundred grueling days of hell that all Legion members must survive. The Legion will have to cross the Canyon, beyond the protection of the Ring, into the Wilds, and set sail across the Tartuvian Sea for the Isle of Mist, said to be patrolled by a dragon, for their initiation into manhood.

Will they make it back? Will the Ring survive in their absence? And will Thor finally learn the secret of his destiny?

With its sophisticated world-building and characterization, A MARCH OF KINGS is an epic tale of friends and lovers, of rivals and suitors, of knights and dragons, of intrigues and political machinations, of coming of age, of broken hearts, of deception, ambition and betrayal. It is a tale of honor and courage, of fate and destiny, of sorcery. It is a fantasy that brings us into a world we will never forget, and which will appeal to all ages and genders.

NOTE: In response to reader requests, the book has now been professionally edited and copyedited, and this file version has all the typographical and grammatical errors corrected.

Grabbed my attention from the beginning and did not let go.This story is an amazing adventure that is fast paced and action packed from the very beginning. There is not a dull moment to be found.
--Paranormal Romance Guild {regarding Turned}

Jam packed with action, romance, adventure, and suspense. Get your hands on this one and fall in love all over again.
--vampirebooksite.com (regarding Turned)

A great plot, and this especially was the kind of book you will have trouble putting down at night. The ending was a cliffhanger that was so spectacular that you will immediately want to buy the next book, just to see what happens.
--The Dallas Examiner {regarding Loved}