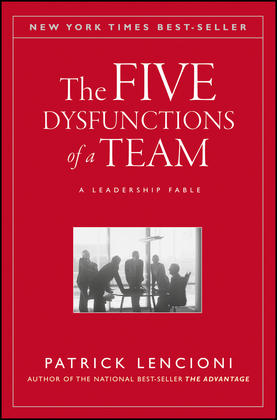 The Five Dysfunctions of a Team

After her first two weeks observing the problems at DecisionTech, Kathryn Petersen, its new CEO, had more than a few moments when she wondered if she should have taken the job. But Kathryn knew there was little chance she would have turned it down. After all, retirement had made her antsy, and nothing excited her more than a challenge. What she could not have known when she accepted the job, however, was just how dysfunctional her team was, and how team members would challenge her in ways that no one ever had before.

For twenty years, The Five Dysfunctions of a Team has been engaging audiences with a page-turning, realistic fable that follows the travails of Kathryn Petersen, DecisionTech’s CEO, as she faces the ultimate leadership crisis. She must unite a team in such disarray that it threatens to derail the entire company.

Equal parts leadership fable and business handbook, this definitive source on teamwork by Patrick Lencioni reveals the five behavioral tendencies that go to the heart of why even the best teams struggle. He offers a powerful model and step-by-step guide for overcoming those dysfunctions and getting every one rowing in the same direction.

Today, the lessons in The Five Dysfunctions of a Team are more relevant than ever. This special anniversary edition celebrates one of the best-selling business books of all time with a new foreword from the author that reflects on its legacy and lessons.