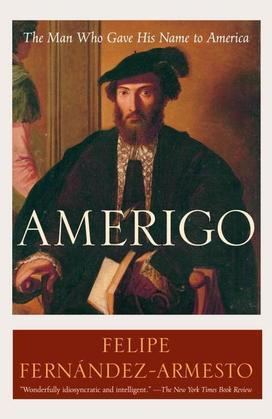 Amerigo: The Man Who Gave His Name to America

In 1507, European cartographers were struggling to redraw their maps of the world and to name the newly found lands of the Western Hemisphere. The name they settled on: America, after Amerigo Vespucci, an obscure Florentine explorer.

In Amerigo, the award-winning scholar Felipe Fernández-Armesto answers the question “What’s in a name?” by delivering a rousing flesh-and-blood narrative of the life and times of Amerigo Vespucci. Here we meet Amerigo as he really was: a sometime slaver and small-time jewel trader; a contemporary, confidant, and rival of Columbus; an amateur sorcerer who attained fame and honor by dint of a series of disastrous failures and equally grand self-reinventions. Filled with well-informed insights and amazing anecdotes, this magisterial and compulsively readable account sweeps readers from Medicean Florence to the Sevillian court of Ferdinand and Isabella, then across the Atlantic of Columbus to the brave New World where fortune favored the bold.

Amerigo Vespucci emerges from these pages as an irresistible avatar for the age of exploration–and as a man of genuine achievement as a voyager and chronicler of discovery. A product of the Florentine Renaissance, Amerigo in many ways was like his native Florence at the turn of the sixteenth century: fast-paced, flashy, competitive, acquisitive, and violent. His ability to sell himself–evident now, 500 years later, as an entire hemisphere that he did not “discover” bears his name–was legendary. But as Fernández-Armesto ably demonstrates, there was indeed some fire to go with all the smoke: In addition to being a relentless salesman and possibly a ruthless appropriator of other people’s efforts, Amerigo was foremost a person of unique abilities, courage, and cunning. And now, in Amerigo, this mercurial and elusive figure finally has a biography to do full justice to both the man and his remarkable era.

“An outstanding historian of Atlantic exploration, Fernández-Armesto delves into the oddities of cultural transmission that attached the name America to the continents discovered in the 1490s. Most know that it honors Amerigo Vespucci, whom the author introduces as an amazing Renaissance character independent of his name’s fame–and does Fernández-Armesto ever deliver.”
–Booklist (starred review)