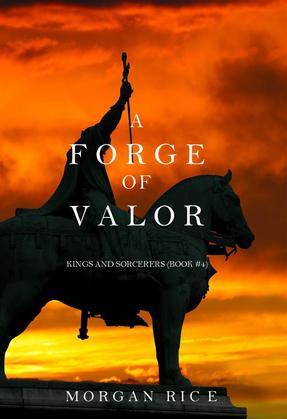 A Forge of Valor (Kings and Sorcerers--Book 4)

The #1 Bestselling series, with over 400 five star reviews on Amazon!

A FORGE OF VALOR is book #4 in Morgan Rice’s bestselling epic fantasy series KINGS AND SORCERERS (which begins with RISE OF THE DRAGONS, a free download)!

In A FORGE OF VALOR, Kyra slowly returns from the verge of death, healed by Kyle’s love and mysterious power. As he sacrifices for her, she regains her strength—yet not without a price. She presses Alva for the secret of her lineage, and he finally reveals all about her mother. Given a chance to quest to the source of her power, Kyra must make a crucial choice: whether to complete her training or journey to help her father, who wallows in the capital dungeon, his execution pending.

Aidan, Motley at his side, also strives to rescue his father, trapped in the perilous capital, while in the far corner of the kingdom, Merk, amazed by what he discovers in the Tower of Ur, braces himself against a massive troll invasion. His Tower surrounded, he must fight alongside his fellow Watchers, to defend his nation’s most precious relic.

Dierdre finds herself facing a full-fledged Pandesian invasion in her embattled city of Ur. As her precious city is destroyed all around her, she has to decide whether to escape or to make a final, heroic stand. Alec, meanwhile, finds himself at sea with his cryptic newfound friend, sailing to a land he’s never been, one even more mysterious than his companion. It is here that, finally, he learns of his destiny—and of the last hope for Escalon.

With its strong atmosphere and complex characters, A FORGE OF VALOR is a sweeping saga of knights and warriors, of kings and lords, of honor and valor, of magic, destiny, monsters and dragons. It is a story of love and broken hearts, of deception, ambition and betrayal. It is fantasy at its finest, inviting us into a world that will live with us forever, one that will appeal to all ages and genders.

Book #5 in KINGS AND SORCERERS will be published soon.