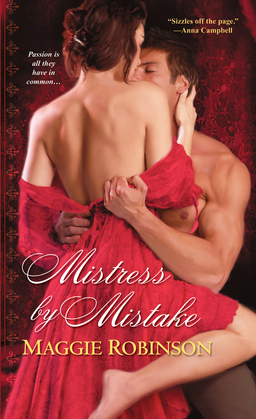 by Maggie Robinson (Author)
Buy for $16.15 Excerpt
Fiction Romance Historical
warning_amber
One or more licenses for this book have been acquired by your organisation details

Scandal Is Only The Beginning. . .

Charlotte Fallon let her guarded virtue fall once--and she's paid dearly for it ever since. She swore she'd never succumb to men's desires again. But even a village spinster's life miles from temptation can't save her from a sister with no shame whatsoever. Or a heart that longs for more, whatever the cost. . .

Sir Michael Bayard found more than he expected in his bed when he finally joined his new mistress. He'd fantasized about her dewy skin and luscious curves, assured her understanding that what passed between them was mere dalliance. But he didn't expect the innocence and heat of her response in his arms. Nor her surprisingly sharp tongue once she was out of them. . .

A few days of abandon cannot undo the hard-learned lessons of a lifetime. Nor can an honest passion burn away the restraints of society's judgments. Unless, of course, one believes in nonsense like true love. . .

As children, Desmond Ryland, Marquess of Conover, and Laurette Vincent were inseparable. As young adults, their friendship blossomed into love. But then fate intervened, sending them down different paths. Years later, Con still can't forget his beautiful Laurette. Now he's determined to make her his forever. There's just one problem. Laurette keeps refusing his marriage proposals. Throwing honor to the wind, Con decides that the only way Laurette will wed him is if he thoroughly seduces her. . .

Laurette's pulse still quickens every time she thinks of Con and the scorching passion they once shared. She aches to taste the pleasure Con offers her. But she knows she can't. For so much has happened since they were last lovers. But how long can she resist the consuming desire that demands to be obeyed. . .?

"Sizzles off the page." --Anna Campbell

Too late for cold feet

Baron Edward Christie prided himself on his reputation for even temperament and reserve. That was before he met Caroline Parker. Wedding a scandalous beauty by special license days after they met did not inspire respect for his sangfroid. Moving her to a notorious lovebirds' nest as punishment for her flighty nature was perhaps also a blow. And of course talk has gotten out of his irresistible clandestine visits. Christie must put his wife aside—if only he can get her out of his blood first.

Caroline Parker was prepared to hear the worst: that her husband had determined to divorce her, spare them both the torture of passion they can neither tame nor escape. But his plan is wickeder than any she's ever heard. Life as his wife is suffocating. But she cannot resist becoming her own husband's mistress. . .

"Sizzles off the page." —Anna Campbell