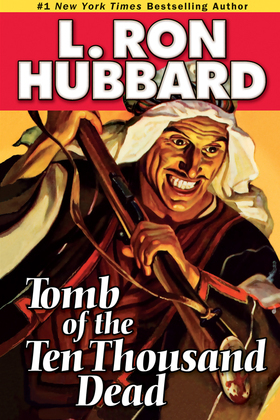 Tomb of the Ten Thousand Dead

by L. Ron Hubbard (Author)
Buy for $4.99 Excerpt
Fiction War & military English literature American and Canadian literature
warning_amber
One or more licenses for this book have been acquired by your organisation details

Action packed and captivating tale. Captain Gordon is a Tomb Raider. Hired to fly a team of American anthropologists to an arid mountain region now part of Pakistan bordering the Arabian Sea. All goes well until an ancient map is discovered in an old pottery jar, revealing the site of a vast lost treasure that Alexander the Great was bringing to Greece from his conquest of India. More than 10,000 of Alexander's soldiers and camp followers lay buried in the high desert plains along with the loot of India - hidden in a tomb never to be reclaimed. With the map's discovery, all academic pretense is dropped. Now Gordon finds himself caught in the middle of the expedition where murder replaces scholarship as the best method to uncover the valuable hoard. His colleagues have one goal now, to raid a tomb belonging to Alexander the Great at all cost.

Not only was Hubbard steeped in the history of the ancient world, he was also an avid adventurer—both in his own right and as a respected member of the famed Explorers Club. As such, he brought a wealth of insight, experience and authenticity to all his tales of adventure.

Also includes two additional adventures: The Price of a Hat, in which the key to the Russian Czar’s life is hidden in a most unexpected place, and Starch and Stripes, the story of a U.S. Marine who sets a trap for a tropical warlord that reverberates all the way back to Washington.

“An exciting story told at a brisk clip, with characters and dialogue that keep readers glued to the page: Hubbard at his best.” —Booklist