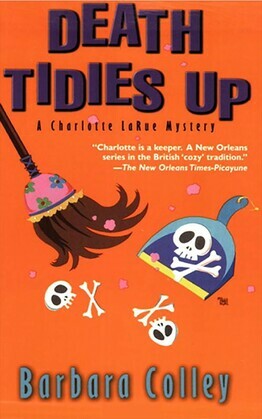 Between running her maid service (the successful Maid-for-a-Day) and fretting about her upcoming birthday (the dreaded 6-0), Charlotte LaRue doesn't have much time for gossip. But New Orleans's latest dust-up is hard to ignore--especially since it involves Marian Hebert, one of Charlotte's new clients. Turns out Marian's now-deceased husband once worked for his best friend Drew Bergeron's real-estate agency--and when the business deal soured, so did the friendship. The whole sordid affair came to an unfortunate end when Drew died in a plane crash--and Bill Hebert was killed in what some people insist on calling an accident. Others are convinced it was murder.

Pretty juicy stuff, right? Charlotte doesn't think so. She's trying her best to forget all the rumors--she has more important things to worry about these days. Like vacuuming, window-washing. . .and her new job at the old Devilier house. The gorgeous historic home is being transformed into luxury apartments, and Maid-for-a-Day is in charge of the cleanup. Should be easy enough, Charlotte thinks--until she finds a barely-cold corpse in one of the closets.

With old rivalries flaring--and past secrets suddenly back in the present--Charlotte has a feeling this job will involve some real dirty work. Good thing she has a knack for cleaning up crimes. . .