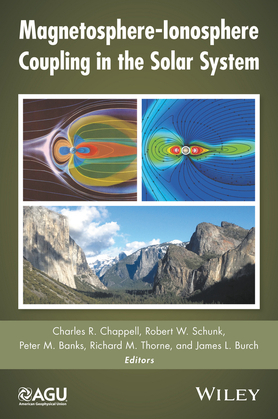 Magnetosphere-Ionosphere Coupling in the Solar System

Over a half century of exploration of the Earth’s space environment, it has become evident that the interaction between the ionosphere and the magnetosphere plays a dominant role in the evolution and dynamics of magnetospheric plasmas and fields. Interestingly, it was recently discovered that this same interaction is of fundamental importance at other planets and moons throughout the solar system. Based on papers presented at an interdisciplinary AGU Chapman Conference at Yosemite National Park in February 2014, this volume provides an intellectual and visual journey through our exploration and discovery of the paradigm-changing role that the ionosphere plays in determining the filling and dynamics of Earth and planetary environments. The 2014 Chapman conference marks the 40th anniversary of the initial magnetosphere-ionosphere coupling conference at Yosemite in 1974, and thus gives a four decade perspective of the progress of space science research in understanding these fundamental coupling processes. Digital video links to an online archive containing both the 1974 and 2014 meetings are presented throughout this volume for use as an historical resource by the international heliophysics and planetary science communities.

Topics covered in this volume include:

Magnetosphere-Ionosphere Coupling in the Solar System is a valuable resource for researchers in the fields of space and planetary science, atmospheric science, space physics, astronomy, and geophysics.

Read an interview with the editors to find out more:
https://eos.org/editors-vox/filling-earths-space-environment-from-the-sun-or-the-earth