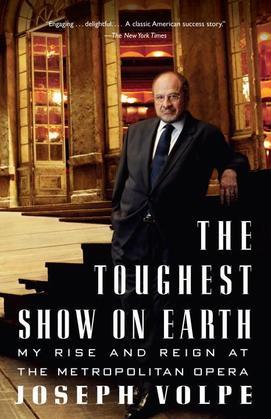 The Toughest Show on Earth: My Rise and Reign at the Metropolitan Opera

The Toughest Show on Earth is the ultimate behind-the-scenes chronicle of the divas and the dramas of New York’s Metropolitan Opera House, by the remarkable man who rose from apprentice carpenter to general manager.

Joseph Volpe gives us an anecdote-filled tour of more than four decades at the Met, an institution full of vast egos and complicated politics. With stunning candor, he writes about the general managers he worked under, his embattled rise to the top, the maneuverings of the blue-chip board, and his masterful approach to making a family of such artist-stars as Luciano Pavarotti, Placido Domingo, Teresa Stratas, and Renee Fleming, and such visionary directors as Franco Zeffirelli, Robert Wilson, and Julie Taymor. Intimate and frank, The Toughest Show on Earth is not only essential for music lovers, but for anyone who wants to understand the inner workings of the culture business.