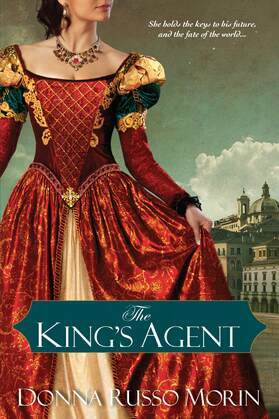 To the casual observer, Battista della Paglia is an avid art collector, or perhaps a nimble thief. In reality, the cunning Italian is an agent for François, the King of France, for whom he procures the greatest masterpieces of the day by any means necessary. Embroiled in a power struggle with Charles V, the King of Spain, François resolves to rule Europe's burgeoning cultural world. When he sets his sights on a mysterious sculpture, Battista's search for the elusive objet d'art leads him to a captivating woman on a mission of her own. . .

Having spent her life under the controlling eye of her protector, the Marquess of Mantua, Aurelia longs for freedom. And she finds it in Battista. Together, they embark on a journey to find the clues that will lead him to the sculpture-- a venture so perilous it might have spilled from the pen of Dante himself. From the smoldering depths of Rome to a castle in the sky, the harrowing quest draws them inextricably together. But Aurelia guards a dark secret that could tear them apart--and change the course of history. . .

Praise for the novels of Donna Russo Morin

"Morin has created a wonderful heroine and painted a brilliant portrait of a neglected court, which will interest fans of the Tudor era."--Publishers Weekly on To Serve a King

"History comes to life as Morin recreates the lush and dangerous world of the Murano glassmakers. . . Her story swirls together colors of political and religious intrigue, murder, and romance." --Romantic Times, (4 Stars) on The Secret of the Glass

"As opulent and sparkling as Louis XIV's court and as filled with intrigue, passion and excitement as a novel by Dumas. . .a feast for the senses." --Romantic Times (4 stars) on The Courtier's Secret