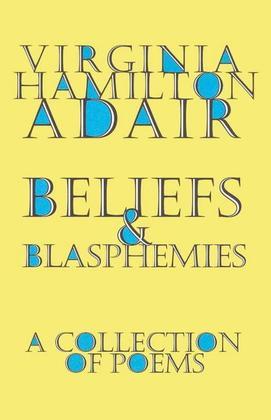 Beliefs and Blasphemies: A Collection of Poems

Beliefs and Blasphemies exhibits the same qualities--accessibility, deep feeling, wisdom, humor, and technical brilliance--that made Virginia Hamilton Adair's first collection of poems, Ants on the Melon, into a bestseller and a literary landmark. Here Mrs. Adair devotes her attention to a single theme, religion, but in her brilliant performance the theme's variations turn out to be wide and deep--from reverence to iconoclasm, from comedy to profundity, from joy to lament. If you are looking for Hallmark platitudes or E-Z faith, look elsewhere.

In "Saving the Songs," for example, we reconsider Martin Luther's penchant for recycling barroom tunes into hymns: "Said Luther of the singing in saloons,/'Why should the devil have the choicest tunes?'" More soberly, in "The Reassem-blage," we are asked to test the extremes of the Christian version of the hereafter--"one a verdict brutal beyond imagination,/the other by most reports an eternity of boredom"--against our hearts' hopes. The conclusion? "Some myths are too terrible for our believing." "Goddesses First" muses about the primacy of female deities in many religious myths. "Choosing" uses the poet's virtual blindness to explain her celebration of the only distinction her "frail vision can discern": the literal difference between night and day. Zen temples and the chapel at a state mental hospital, animism and meditation, whores and angels--this curious, witty, and compassionate sensibility encompasses them all.
Virginia Hamilton Adair is a uniquely American poet--restless in her lyrical investigations, hopeful and honest, rigorous in her formal accomplishments, spontaneous in her emotions. Beliefs and Blasphemies will appeal to anyone who has ever thought about first things or final things--anyone who enjoys speculating about how we got here and where we're going--and it will reconfirm its author's stature as a national treasure.