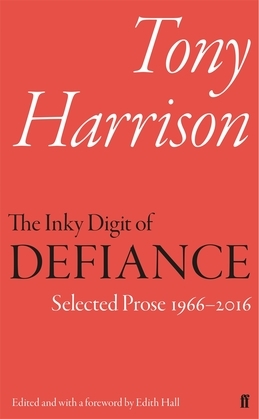 The Inky Digit of Defiance

In this richly varied selection of Tony Harrison's provocative prose of the last fifty years, the great poet of page, stage and screen presents a lifetime's thinking about art and politics, creativity and mortality. In so doing, he takes us on an extraordinary journey through languages and across continents and millennia, from his Nigerian Lysistrata to the British Raj of his version of Racine's Ph?dre, to post-Communist Europe for the film Prometheus to a one-off performance of The Kaisers of Carnuntum at the Roman amphitheatre between Vienna and Bratislava, tothe peace camp at Greenham Common, and from a Leeds street bonfire celebrating the defeat of Japan by the new atomic bomb to wines made from the vines on volcanoes.

A collection of work filled with passion and humour that educates as it dazzles.

'Slangy, rooted, erudite, rhythmic, Harrison is a titan among poets; a unique Yorkshire brew of Auden, Byron, Brecht and Kipling, with a slug of Roman satire.' Independent