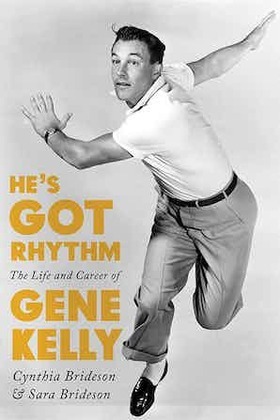 FOR IMMEDIATE RELEASE Word Count: 477 GENE KELLY: HELLUVA DANCER The first comprehensive biography written since the legendary dancer's death, He's Got Rhythm uncovers the personal and professional life of an enduring entertainer who had America "Singin' in the Rain." Lexington, Kentucky—Stanley Donen, director of Singin' In the Rain, once said that if a person needed to be cheered up, all they had to do was watch Gene Kelly. Kelly, one of the most beloved icons of Hollywood's Golden Era, was a man who sang and danced in the rain, convinced a group of Parisian children that they "got rhythm," and banished worry from a cartoon kingdom ruled by Jerry the Mouse. From choreography to directing in films like Anchors Aweigh (1945), On the Town (1949), and Hello, Dolly! (1969), Kelly brought joy and enchantment to American film audiences. Despite—in his own words—looking like a truck driver even when dressed in top hat and tails, his beautiful dancing and expert choreography was a unique art form that came to symbolize the hope and optimism of postwar America. He's Got Rhythm: The Life and Career of Gene Kelly explores the life and legacy of a man whose impact on film is immeasurable and uncovers the intimate details of a life filled with spectacle and controversy. Authors Cynthia and Sara Brideson draw on a wide range of sources, including a personal interview with Kelly's daughter, Kerry, as well as oral histories and primary accounts from family, friends, and collaborators such as Kelly's first wife, blacklisted actress Betsy Blair, and the songwriters of Singin' In the Rain. Beyond simply starring in the films, Kelly revolutionized the art of dance. He choreographed nearly all his routines, including the seventeen-minute ballet at the center of 1951's Best Picture An American in Paris who, in the words of Blair, "democratized dance," creating an American style that was as much sport as art. His work also pioneered the concept of cine-dance, dancing that could not be replicated on stage, and his choreography worked to seamlessly integrate the dance sequences into the film's continuity. Kelly's life was often just as dramatic as his dances. From his dramatic ups and downs of three marriages to his lifelong support of the Democratic Party, the dancer's life outside the screen was just as layered as his life within. Perhaps most revealing, and at times surprising, are accounts of Kelly as a doting yet strict father, a pioneering filmmaker for the United States Navy, and a political activist against the House Un-American Activities Committee. Moreover, he is also remembered for his fierce competiveness, which often landed him in arguments with friends and collaborators like Stanley Donen and Fred Astaire. Born in Pittsburgh, Kelly began dance lessons at the age of eight, and he once said that he only "got started dancing because it was one way to meet girls." Regardless of his initial intentions, it is clear that he far exceeded them. Gene Kelly was a dancer of the people who changed the way that Hollywood and moviegoers looked at dancing forever. Cynthia Brideson is coauthor of Also Starring... : Forty Biographical Essays on the Greatest Character Actors of Hollywood's Golden Era, 1930–1965 and Ziegfeld and His Follies: A Biography of Broadway's Greatest Producer. Sara Brideson (1990–2017) is coauthor of Also Starring... : Forty Biographical Essays on the Greatest Character Actors of Hollywood's Golden Era, 1930–1965 and Ziegfeld and His Follies: A Biography of Broadway's Greatest Producer. The University Press of Kentucky (UPK) is the scholarly publisher for the Commonwealth of Kentucky, serving all state institutions of higher learning, plus five private colleges and Kentucky's two major historical societies.