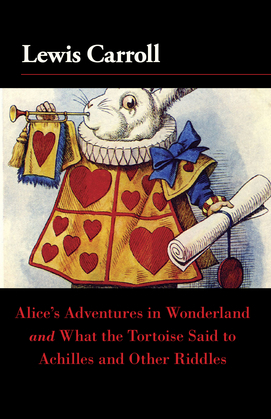 by Lewis Carroll (Author)
Buy for $1.99 Excerpt
Fiction Juvenile & young adult Classics
warning_amber
One or more licenses for this book have been acquired by your organisation details

Alice's Adventures in Wonderland (1865) is a novel that tells the story of a girl named Alice who falls down a rabbit hole into a fantasy world populated by peculiar and anthropomorphic creatures. The tale is filled with allusions to Dodgson's friends. The tale plays with logic in ways that have given the story lasting popularity with adults as well as children. It is considered to be one of the most characteristic examples of the genre of literary nonsense, and its narrative course and structure have been enormously influential, mainly in the fantasy genre. The second part of this books contains Lewis Carroll's short dialogue "What the Tortoise Said to Achilles" (1895) playfully questions the principles of logic. Problems arise and branch out from Zeno's paradox that begins with Achilles attempting to pass the tortoise in the race, but ultimately failing to do so through the tortoise's clever arguments. This is an entertaining tale of the ultimate race that cannot be completed using the foundations of logic.