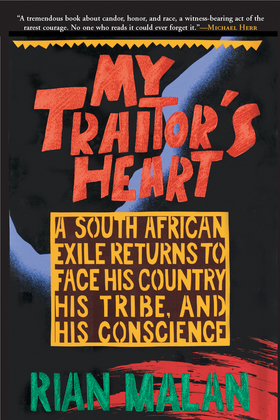 by Rian Malan (Author)
Buy for $17.00 Excerpt
Nonfiction History History by country Africa Republic of South Africa
warning_amber
One or more licenses for this book have been acquired by your organisation details
“Here is truth-telling at its most exemplary and courageous. The remorseless exercise of a reporter’s anguished conscience gives us a South Africa we thought we knew all about: but we knew nothing.” —John le Carré
My Traitor’s Heart is an astonishing work of reportage, at once beautiful, horrifying, and profound—a book unlike any other about South Africa. Rian Malan is an Afrikaner, scion of a centuries-old clan deeply involved in the creation of apartheid. As a young crime reporter, Malan covered the atrocities of an undeclared race war and ultimately fled the country, unhinged by what he had seen. Eight years later, he returns to confront his own demons, and those that are tearing his country apart. Written in the final years of apartheid’s bloody collapse, My Traitor’s Heart still resonates, offering a chilling—but ultimately redemptive—vision of the darkest recesses of the black and white South African psyches.
Format
EPUB
Protection
Watermark
Publication date
March 11, 2012
Publisher
Grove Press
Page count
368
ISBN
9780802193902
Paper ISBN
9780802136848
File size
1 MB
2227256
item