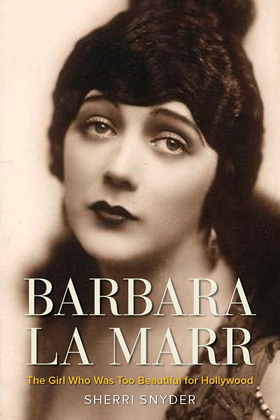 by Sherri Snyder (Author)
Buy for $40.00 Excerpt
Nonfiction Biography & autobiography Entertainment & performing arts
warning_amber
One or more licenses for this book have been acquired by your organisation details

Barbara La Marr's (1896–1926) publicist once confessed: "There was no reason to lie about Barbara La Marr. Everything she said, everything she did was colored with news-value." When La Marr was sixteen, her older half-sister and a male companion reportedly kidnapped her, causing a sensation in the media. One year later, her behavior in Los Angeles nightclubs caused law enforcement to declare her "too beautiful" to be on her own in the city, and she was ordered to leave. When La Marr returned to Hollywood years later, her loveliness and raw talent caught the attention of producers and catapulted her to movie stardom.

In the first full-length biography of the woman known as the "girl who was too beautiful," Sherri Snyder presents a complete portrait of one of the silent era's most infamous screen sirens. In five short years, La Marr appeared in twenty-six films, including The Prisoner of Zenda (1922), Trifling Women (1922), The Eternal City (1923), The Shooting of Dan McGrew (1924), and Thy Name Is Woman (1924). Yet by 1925—finding herself beset by numerous scandals, several failed marriages, a hidden pregnancy, and personal prejudice based on her onscreen persona—she fell out of public favor. When she was diagnosed with a fatal lung condition, she continued to work, undeterred, until she collapsed on set. She died at the age of twenty-nine.

Few stars have burned as brightly and as briefly as Barbara La Marr, and her extraordinary life story is one of tempestuous passions as well as perseverance in the face of adversity. Drawing on never-before-released diary entries, correspondence, and creative works, Snyder's biography offers a valuable perspective on her contributions to silent-era Hollywood and the cinematic arts.