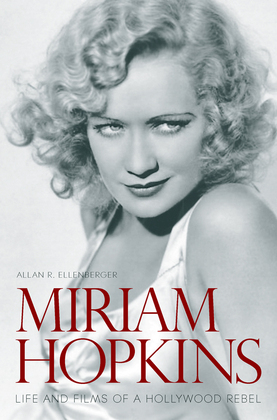 Miriam Hopkins (1902–1972) first captured moviegoers' attention in daring precode films such as Dr. Jekyll and Mr. Hyde (1931), The Story of Temple Drake (1933), and Ernst Lubitsch's Trouble in Paradise (1932). Though she enjoyed popular and critical acclaim in her long career—receiving an Academy Award nomination for Becky Sharp (1935) and a Golden Globe nomination for The Heiress (1949)—she is most often remembered for being one of the most difficult actresses of Hollywood's golden age. Whether she was fighting with studio moguls over her roles or feuding with her avowed archrival, Bette Davis, her reputation for temperamental behavior is legendary.

In the first comprehensive biography of this colorful performer, Allan R. Ellenberger illuminates Hopkins's fascinating life and legacy. Her freewheeling film career was exceptional in studio-era Hollywood, and she managed to establish herself as a top star at Paramount, RKO, Goldwyn, and Warner Bros. Over the course of five decades, Hopkins appeared in thirty-six films, forty stage plays, and countless radio programs. Later, she emerged as a pioneer of TV drama. Ellenberger also explores Hopkins's private life, including her relationships with such intellectuals as Theodore Dreiser, Dorothy Parker, Gertrude Stein, and Tennessee Williams. Although she was never blacklisted for her suspected Communist leanings, her association with these freethinkers and her involvement with certain political organizations led the FBI to keep a file on her for nearly forty years. This skillful biography treats readers to the intriguing stories and controversies surrounding Hopkins and her career, but also looks beyond her Hollywood persona to explore the star as an uncompromising artist. The result is an entertaining portrait of a brilliant yet underappreciated performer.