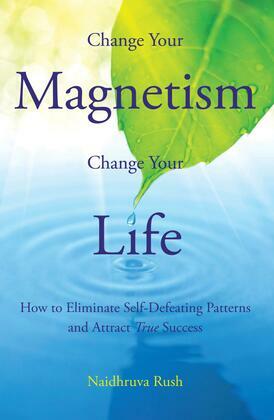 by Naidhruva Rush (Author)
Buy for $11.99 Excerpt
Nonfiction Health & fitness Self-help Religion Oriental religions and wisdom Well-being
warning_amber
One or more licenses for this book have been acquired by your organisation details

A basic principle of magnetism is that “like attracts like.” We become like the people with whom we mingle, not through their conversation, but through the magnetic vibrations emanating from their bodies. The person whose magnetism is stronger gives his vibrations to the other.

Paramhansa Yogananda—the great spiritual teacher and author of the classic, Autobiography of a Yogi—described spiritual magnetism as the “power of all powers,” and often counseled people, even those seeking material success, to concentrate first on developing spiritual magnetism. He said: “Develop power to attract the highest thing, then you can easily attract all lesser things.” When we have strong spiritual magnetism, we are able to attract whatever else we need: inspiration, money, the right job, a good living situation, or a compatible life partner.

Naidhruva Rush graduated from Harvard Law School in 1964, and then worked in the Civil Rights Movement as a staff attorney for the NAACP Legal Defense Fund. She later served as Director of Community Law Offices in New York City. While working as a law professor in the mid-1970s, Naidhruva read Paramansa Yogananda’s classic "Autobiography of a Yogi", and a year later, moved to Ananda Village with her eight-year-old son. Since then, Naidhruva has served as a minister and teacher at Ananda, offering courses on meditation and spiritual living. She currently serves as editor of "The Essence of Clarity" (formerly Clarity magazine) and previously edited "In Divine Friendship" and "Swami Kriyananda: A Life in God". Naidhruva is also the author of "The Ananda Cookbook".