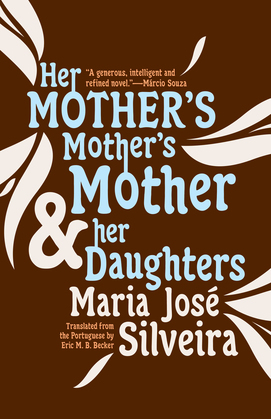 by Maria José Silveira (Author), Eric M. B. Becker (Translator)
Buy for $13.95 Excerpt
Fiction Short stories Lusophone literature
warning_amber
One or more licenses for this book have been acquired by your organisation details

Spanning 500 years of Brazilian history, Her Mother's Mother's Mother and Her Daughters chronicles a family of women, beginning in 1500 with the birth of Inaiá, daughter of a Tupiniquim warrior, and ending in 2001 with Inaiá's distant descendent, Maria Flor. As each new daughter takes the place of her mother, and the mothers before her, Maria José Silveira's captivating, cinematic prose takes us through the formation of the country itself, as well as through the roles, customs, challenges, and intrigues of the women within it.

Subversive and refreshing, Silveira blends great storytelling with personal politics to critique the machismo, authoritarianism, and abuses of power prevalent in Brazilian culture.

It's a delicate subject, the family story is complicated, and not everything was wine and roses. There was, of course, much happiness and love, many battles and accomplishments, great feats—after all, the women here helped to build this country from nearly nothing. But there were also stories of insanity, or murderesses, and not a few sorrows and tragedies. Great disappointments. A good many of them.

Maria José Silveira is the author of ten novels, including the prize-winning Her Mother's Mother's Mother and Her Daughters, the film rights to which were sold to TV Globo.

Eric M. B. Becker is editor of Words Without Borders and an award-winning journalist and literary translator. He received a PEN/Heim Translation grant for his work on Mia Couto, and has also translated works by Lygia Fagundes Telles, Noemi Jaffe, and others.