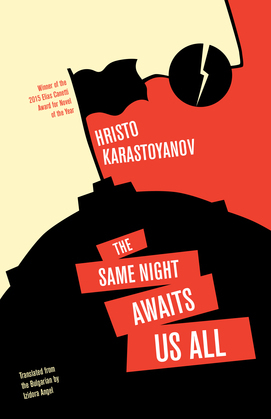 The Same Night Awaits Us All

by Hristo Karastoyanov (Author), Izidora Angel (Translator)
Buy for $12.95 Excerpt
Fiction Literary Slavic literature
warning_amber
One or more licenses for this book have been acquired by your organisation details

"Karastoyanov's novel is set in Bulgaria in the 1920s, but also invokes the spirit of John Lennon, and brings to mind Dostoevsky's Demons with its anarchists and assassins, lighthouses, zeppelins, and synthesis of modernist narrative techniques and Balkan storytelling." —Berliner Zeitung

In June of 1923, a military coup established Aleksandar Tsankov as the new leader of Bulgaria. His fascist policies—especially aimed at the Bulgarian Communist Party—led to the failed September Uprising and an extended period of martial law.

At that same time, Geo Milev—one of Bulgaria's most beloved poets—started a politically charged literary magazine with Georgi Sheytanov, a notorious anarchist on the run. Eighteen months later, the government assassinated both of them, although Milev's body wouldn't be found for another thirty years.

In this multilayered historical novel that calls to mind Laurent Binet's HHhH, Hristo Karastoyanov deconstructs this period, blending this adventurous tale of resistance with current-day reflections on what this period meant to Bulgaria and the world.

Hristo Karastoyanov is a multi-award winning contemporary Bulgarian novelist, playwright, and political essayist whose work has been translated into English, Turkish, and German. All seven of his novels have been shortlisted for the prestigious Helikon Award.

Izidora Angel is a Bulgarian-born writer and translator. She has written essays and critique in English and Bulgarian for the Chicago Reader, Publishing Perspectives, Banitza, Egoist, and others. She received a grant from English PEN for her work on The Same Night Awaits Us All.