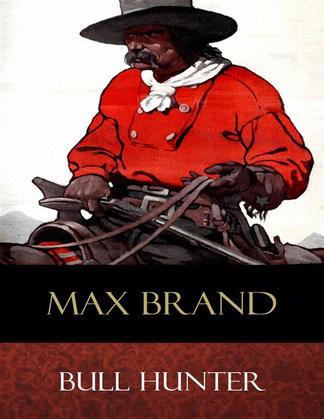 In the old West, laws were often loosely and arbitrarily applied, so many gunslingers and cowboys took the law into their own hands and applied eye-for-an-eye justice on their own terms. The huge, lumbering outlaw Bull Hunter intends to hunt down and kill the men responsible for his uncle's death. When he finds out that the ringleader is already behind bars, he devises a clever plot to spring his nemesis in order to dispense his comeuppance, street justice-style.

Bull Hunter, a "gentle giant", was ridiculed because of his size but as he grew older he became quick with a gun and partnered with the black stallion named "Diablo". The duo are unstoppable. Brand’s lyrical writing involves the gentle connection between man and a horse's spirit.

Bull sighed. "I ain't got much time, partner," he said. Approaching the door, he examined it wistfully. "But, maybe, they's another way." He drew back a little, raised his right leg, and smashed the heavy cowhide boot against the door. The wood split from top to bottom, and Bull's leg was driven on through the aperture. He paused to wrench the fragments of the door from lock and hinges and then beckoned to Pete Reeve. "Look for your gun in here, Reeve."

Max Brand, was the pen name of Frederick Schiller Faust. He was a prolific American author best known for his classic western novels. Brand also created the famous character Dr. Kildare which became the basis of many films and television shows.