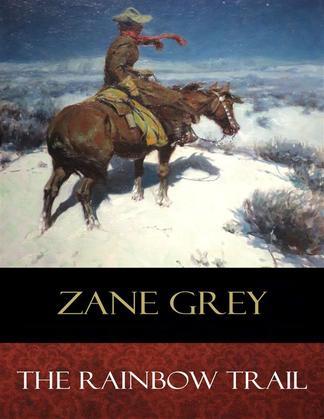 by Zane Grey (Author)
Buy for €1.49 Excerpt
Fiction Juvenile & young adult Westerns Classics Westerns Action & adventure Classics
warning_amber
One or more licenses for this book have been acquired by your organisation details

The story of a young clergyman who becomes a wanderer in the great western uplands—until at last love and faith awake.

The novel takes place ten years after events of Riders of the Purple Sage. The wall to Surprise Valley has broken, and Jane Withersteen is forced to choose between Lassiter's life and Fay Larkin's marriage to a Mormon.

Both novels are notable for their protagonists' mild opposition to Mormon polygamy, but in The Rainbow Trail this theme is treated more explicitly. The plots of both books revolve around the victimization of women in the Mormon culture: events in Riders of the Purple Sage are centered on the struggle of a Mormon woman who sacrifices her wealth and social status to avoid becoming a junior wife of the head of a local church, while The Rainbow Trail contrasts the older Mormons with the rising generation of Mormon women who will not tolerate polygamy and Mormon men who do not seek it.