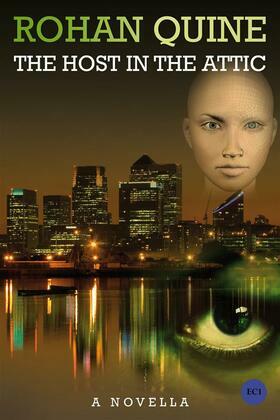 The Host in the Attic

by Rohan Quine (Author)
Buy for €3.99 Excerpt
Fiction LGBTQ+ Horror Literary
warning_amber
One or more licenses for this book have been acquired by your organisation details

The Host in the Attic by Rohan Quine is a hologram of Oscar Wilde’s The Picture of Dorian Gray, digitised and reframed in cinematic style, set in London’s Docklands in a few years’ time. High-flyer Jaymi discovers a secret novel online called The Imagination Thief, written by a woman named Alaia; and they meet and fall in love. In his attic he hides the prototype of a new worldwide Web-browsing hologram, for whose appearance he was the model. While this hologram deteriorates into ever more terrifying corruption, Jaymi’s appearance remains forever sweet and youthful, despite his escalating evil … until the inevitable reckoning unfolds. A Distinguished Favorite in the NYC Big Book Award 2021.

Brilliant software engineer Rik and executive Jaymi work at digital agencies in London (surely unaware that their fates are destined to echo those of Basil and Dorian, respectively the painter and the subject of The Picture of Dorian Gray). Rik uses Jaymi’s appearance as the model or “skin” for a cutting-edge interactive hologram that navigates the Web in enhanced ways, tailored to every user. The dissolute bigwig “Champagne” Marc makes this into a business reality, and through his cynical eloquence electrifies Jaymi with the knowledge that Jaymi will hereby become the face of the Web. Throughout the film-shoot of Jaymi for the making of the skin, these honeyed words of Marc (like those of Wilde’s Lord Henry to Dorian during the portrait’s creation) light powerful fires of vanity and hubris behind Jaymi’s eyes.

As this holographic Web-guide’s hold over global information grows to a near monopoly, Jaymi is lionised, finding no door closed. But he yearns for still more: to see what the hologram itself can see online. So by trickery he succeeds in getting hold of a unique copy of the prototype hologram, with all regular filters removed.

In private files online he thereby discovers a not-yet-published novel that will come to be called The Imagination Thief, by Alaia Danielle, with whom he has an intense romance (echoing Wilde’s actress Sibyl Vane with Dorian). But when Jaymi brutally dumps her, triggering her suicide, he is shocked to observe, on the same evening, that the face on his private prototype hologram has become crueller. Fascinated, he realises its appearance is changing in accordance with his own behaviour – and he hides it in his attic.

For years he uses his unique online access for ever more megalomaniacal ends, ruining the lives of many whom he lures down into excess, addiction and suicide. While the hologram in the attic deteriorates into quite terrifying corruption, Jaymi’s appearance remains as sweet and youthful as the day he was filmed … until the inevitable reckoning unfolds.