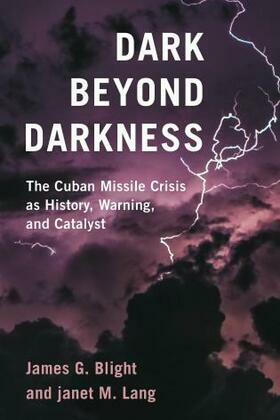 In Dark Beyond Darkness, James Blight and janet Lang, among the world’s foremost authorities on the Cuban missile crisis, synthesize the findings from their thirty-year project on the most dangerous moment in recorded history. Authoritative, accessible, and written with their usual flair and wit, DBD is the first book to take readers deeply inside the experience and calculations of Fidel Castro, who was willing to martyr Cuba if his new Russian ally would nuke the U.S. and destroy it. Blight and Lang have established that in October 1962, the world was on the brink of Armageddon, and that we escaped by luck. Their history is scary but unimpeachably accurate: we just barely escaped the cold and the dark in October 1962.

Their history also comes with a warning: we are currently at risk not only of Armageddon-fast, in a war between superpowers, but Armageddon-in-Slow-Motion (the result a climate catastrophe following a regional nuclear war), and from Armageddon, Oops! (a conflict sparked by an accident, which is misinterpreted, and ends in nuclear war). Drawing on the insights of poets, musicians and novelists, as well as climate scientists and agronomists, they show the terrible risk we run by refusing to abolish nuclear weapons.