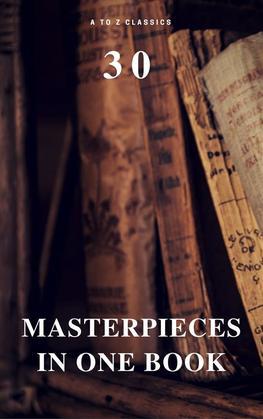 30 Masterpieces in One Book (A to Z Classics)

With A to Z Classics, discover or rediscover all the classics of literature.

The first table of contents (at the very beginning of the ebook) lists the titles of all novels included in this volume. By clicking on one of those titles you will be redirected to the beginning of that work, where you'll find a new TOC that lists all the chapters and sub-chapters of that specific work.

Small women by Louisa May Alcott

Sense and sensitivity by Jane Austen

A tale of two cities by Charles Dickens

The portrait of a lady by Henry James

The Ghost of the Opera by Gaston Leroux

The call of nature by Jack London

The path of Swann by Marcel Proust

Red and black by Stendhal

The art of war by Sun Tzu

The death of Ivan Ilych by Lev Nikolayevich Tolstoy

The Adventures of Huckleberry Finn by Mark Twain

The Ghost of Canterville by Oscar Wilde

The image of Dorian Gray by Oscar Wilde

Night and day by Virginia Woolf