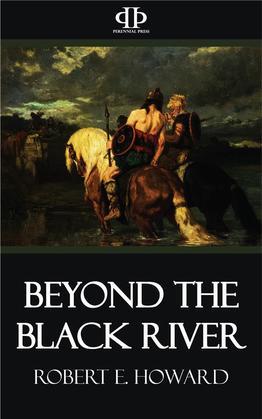 Beyond the Black River

by Robert E. Howard (Author)
Buy for €0.99 Excerpt
Fiction Juvenile & young adult Science fiction
warning_amber
One or more licenses for this book have been acquired by your organisation details

The stillness of the forest trail was so primeval that the tread of a soft-booted foot was a startling disturbance. At least it seemed so to the ears of the wayfarer, though he was moving along the path with the caution that must be practised by any man who ventures beyond Thunder River. He was a young man of medium height, with an open countenance and a mop of tousled tawny hair unconfined by cap or helmet. His garb was common enough for that country—a coarse tunic, belted at the waist, short leather breeches beneath, and soft buckskin boots that came short of the knee. A knife-hilt jutted from one boot-top. The broad leather belt supported a short, heavy sword and a buckskin pouch. There was no perturbation in the wide eyes that scanned the green walls which fringed the trail. Though not tall, he was well built, and the arms that the short wide sleeves of the tunic left bare were thick with corded muscle.

He tramped imperturbably along, although the last settler's cabin lay miles behind him, and each step was carrying him nearer the grim peril that hung like a brooding shadow over the ancient forest.

He was not making as much noise as it seemed to him, though he well knew that the faint tread of his booted feet would be like a tocsin of alarm to the fierce ears that might be lurking in the treacherous green fastness. His careless attitude was not genuine; his eyes and ears were keenly alert, especially his ears, for no gaze could penetrate the leafy tangle for more than a few feet in either direction.

But it was instinct more than any warning by the external senses which brought him up suddenly, his hand on his hilt. He stood stock-still in the middle of the trail, unconsciously holding his breath, wondering what he had heard, and wondering if indeed he had heard anything. The silence seemed absolute. Not a squirrel chattered or bird chirped. Then his gaze fixed itself on a mass of bushes beside the trail a few yards ahead of him. There was no breeze, yet he had seen a branch quiver. The short hairs on his scalp prickled, and he stood for an instant undecided, certain that a move in either direction would bring death streaking at him from the bushes...