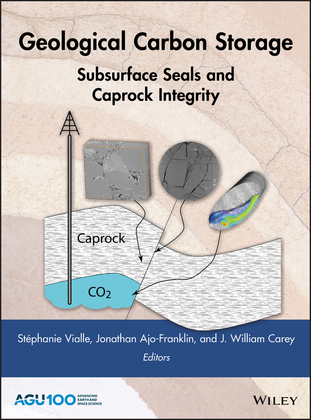 Seals and caprocks are an essential component of subsurface hydrogeological systems, guiding the movement and entrapment of hydrocarbon and other fluids. Geological Carbon Storage: Subsurface Seals and Caprock Integrity offers a survey of the wealth of recent scientific work on caprock integrity with a focus on the geological controls of permanent and safe carbon dioxide storage, and the commercial deployment of geological carbon storage.

Geological Carbon Storage: Subsurface Seals and Caprock Integrity is an invaluable resource for geoscientists from academic and research institutions with interests in energy and environment-related problems, as well as professionals in the field.

This volume is a part of the AGU/Wiley Geophysical Monograph Series. The editors assembled an international team of earth scientists who present a comprehensive approach to the major problem of placing unwanted and/or hazardous fluids beneath a cap rock seal to be impounded.

The compact and informative preface depicts the nature of cap rocks and the problems that may occur over time or with a change in the formation of the cap rock. I have excerpted a quote from the preface that describes the scope of the volume in a concise and thorough matter. “Caprocks can be defined as a rock that prevents the flow of a given fluid at certain temperature, pressure, and chemical conditions. … A fundamental understanding of these units and of their evolution over time in the context of subsurface carbon storage is still lacking.”

This volume describes the scope of current research being conducted on a global scale, with 31 of the 83 authors working outside of the United States. The studies vary but can be generalized as monitoring techniques for cap rock integrity and the consequence of the loss of that integrity. The preface ends by calling out important problems that remain to be answered. These include imaging cap rocks in situ, detecting subsurface leaks before they reach the surface, and remotely examining the state of the cap rock to avert any problems.

Chapter 3 describes how newer methods are used to classify shale. These advanced techniques reveal previously unknown microscopic properties that complicate classification. This is an example of the more we know, the more we don't know.

A sedimentologic study of the formation of shale (by far the major sedimentary rock and an important rock type) is described in Chapter 4. The authors use diagrammatic examples to illustrate how cap rocks may fail through imperfect seal between the drill and wall rock, capillary action, or a structural defect (fault). Also, the shale pore structures vary in size, and this affects the r