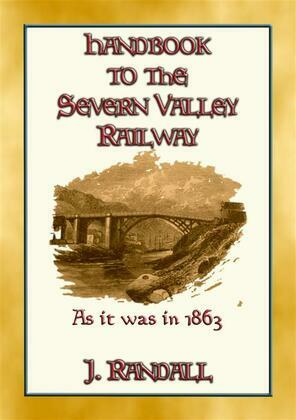 HANDBOOK to the SEVERN VALLEY RAILWAY

This little book explores the Severn Valley and the places the railway passes through from Worcester to Shrewsbury as it was in 1863.

The Severn, like other English rivers, may be said to have been a railway pioneer in having one built along its banks: first, in having done much to correct the inequalities of the surface; secondly, in having indicated the direction in which the traffic flowed; so that early in the history of railway enterprise eminent engineers, like the late Robert Stephenson, saw the desirability of following its course, and thus meeting the wants of towns that had grown into importance upon its banks.

In 1846 the route was finally surveyed by Robert Nicholson, with a view to a through traffic in connection with other railways. The scheme met with opposition from advocates of rival lines. Ultimately, however, the Bill passed the committees of the two Houses, and the promoters were successful, whilst the expenses of counsel and witnesses were enormous. The original estimate for the line was £600,000: £110,000 for land, and £490,000 for works. £8,500 was down for a girder bridge at Arley,£8,000 for one near Quatford, £9,000 for one above Bridgnorth, and £10,000 for one at Shrewsbury. The two bridges near Bridgnorth and the one near Shrewsbury were abandoned, and a considerable saving was effected by shortening the line at Hartlebury, by a junction, with the Oxford, Wolverhampton, and Worcester higher up than was originally intended.

The estimated cost of the works, in consequence of these reductions, and of the determination of the company to make it a single line, was thus reduced to nearly one-half the original sum.

Although the Severn Valley Railway joins the Main Trunk line at Hartlebury, Worcester is regarded as its proper terminus; and at that point we commence our description,

10% of the publisher’s profit from the sale of this book will be donated to UNICEF.