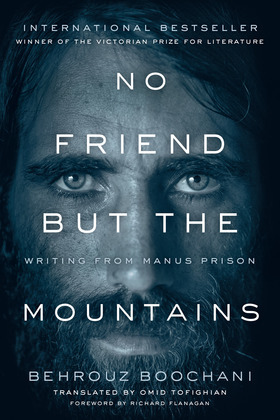 No Friend but the Mountains

Winner of Australia’s richest literary award, No Friend but the Mountains is Kurdish-Iranian journalist and refugee Behrouz Boochani’s account of his detainment on Australia’s notorious Manus Island prison. Composed entirely by text message, this work represents the harrowing experience of stateless and imprisoned refugees and migrants around the world.

In 2013, Kurdish-Iranian journalist Behrouz Boochani was illegally detained on Manus Island, a refugee detention centre off the coast of Australia. He has been there ever since. This book is the result. Laboriously tapped out on a mobile phone and translated from the Farsi.

It is a voice of witness, an act of survival. A lyric first-hand account. A cry of resistance. A vivid portrait of five years of incarceration and exile. Winner of the Victorian Prize for Literature, No Friend but the Mountains is an extraordinary account — one that is disturbingly representative of the experience of the many stateless and imprisoned refugees and migrants around the world.

“Our government jailed his body, but his soul remained that of a free man.” — From the Foreword by Man Booker Prize–winning author Richard Flanagan