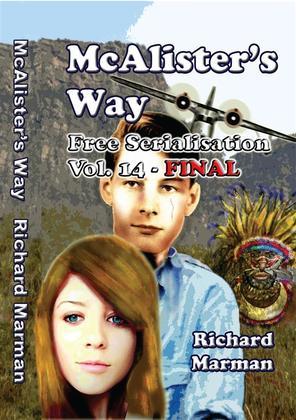 A Young Adult Action and Adventure Story for Baby Boomers

Thank you for taking the time to read this serialisation. I hope you liked reading it as much as I enjoyed writing it.

When I first wrote McAlister’s Way I had no plans for a sequel. In fact I was thinking of turning my Viking novel, The Wealth, into a trilogy, which still might happen. However after writing the epilogue I realised I couldn’t leave the story hovering so Danny and Angela’s adventures grew into a four-volume set.

I wrote McAlister’s Spark in the middle of it all, which is a post-apocalyptic survival adventure with our collator Zach taking centre-stage.

I have also added three McAlister prequels set in the Napoleonic Wars, Wild West and WWI. I’m working on a fourth, set during the Spanish Civil War and into WWII which will give an uninterrupted 200 years of McAlister Family action and adventure.

FOLLOW Danny, Angelia, Monty, Frenchy and the rest of the characters in this series in action-packed adventure after adventure across South East Asia, Africa, the USA, the UK, and beyond in the other books of  The McAlister Line.