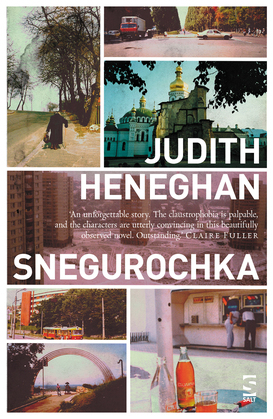 by Judith Heneghan (Author)
Buy for $11.36 Excerpt
Fiction Literary Historical English literature British literature
warning_amber
One or more licenses for this book have been acquired by your organisation details

Snegurochka opens in Kiev in 1992, one year after Ukraine’s declaration of independence. Rachel, a troubled young English mother, joins her journalist husband on his first foreign posting in the city. Terrified of their apartment's balcony with its view of the Motherland statue she develops obsessive rituals to keep her three-month old baby safe. Her difficulties expose her to a disturbing endgame between Elena Vasilyevna, the old caretaker, and Mykola Sirko, a shady businessman who sends Rachel a gift. Rachel is the interloper, ignorant, isolated, yet also culpable with her secrets and her estrangements. As consequences bear down she seeks out Zoya, her husband’s caustic-tongued fixer, and Stepan, the boy from upstairs who watches them all.

Betrayal is everywhere and home is uncertain, but in the end there are many ways to be a mother.