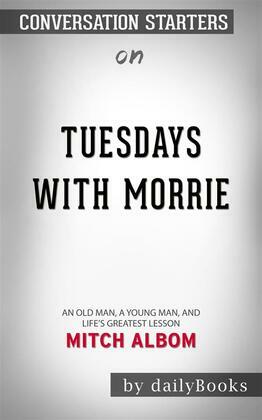 by dailyBooks (Author)
Buy for €3.99 Excerpt
Fiction Fantasy Nonfiction Literary essays
warning_amber
One or more licenses for this book have been acquired by your organisation details

Morrie's name in Hebrew means "my teacher."  In college, sportswriter Mitch Albom looked up to Morrie as his mentor and promised to stay in touch after graduation. He went on to become a successful journalist, winning awards and recognition along the way. For the second time, as Morrie comes close to dying, he is once again a mentor to Albom, this time teaching him lessons about life and death. His teachings touch on the themes of regret, aging, self-pity, love, death, and life. A review by Publishers Weekly says that "far from being awash in sentiment, the dying man retains a firm grasp on reality. " It says the book is "emotionally rich...and a deeply affecting memorial to a wise mentor."

Tuesdays with Morrie was a #1 bestseller in the New York Times' non-fiction list. It remained on the Times bestseller list for four years, becoming the best-selling memoir of all time. It was made into a movie for TV and shown in 1999 with Hank Azaria and Jack Lemmon as lead actors and Mick Jackson as director. The book celebrated its 10th anniversary in 2007 with the publication of a new edition.

A Brief Look Inside:

than the surface of its pages. The characters and their world come alive,

and the characters and its world still live on.

Conversation Starters is peppered with questions designed to

bring us beneath the surface of the page

and invite us into the world that lives on.

These questions can be used to..

• Foster a deeper understanding of the book

• Promote an atmosphere of discussion for groups

• Assist in the study of the book, either individually or corporately

• Explore unseen realms of the book as never seen before