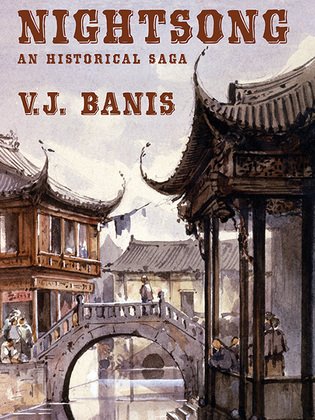 by V.J. Banis (Author)
Buy for $3.99 Excerpt
Fiction Historical
warning_amber
One or more licenses for this book have been acquired by your organisation details

Torn from the protective community of American missionaries in China, young, innocent teenager Lydia Holt has no idea of the harsh realities she will soon face. Forced into a loveless marriage to a sadistic Chinese nobleman, Lydia escapes her cruel confines and flees to San Francisco, only to meet the man she once trusted with her life--a man who now threatens to destroy the cosmetics empire she has established and rules with an iron hand.

For in the secret corner of her heart, lovely Lydia harbors a dream--the unfulfilled promise of a passion that burned all too briefly for a handsome Scots trader with the blackest of souls. A man who tempted her with his fiery kisses, then left her broken-hearted and betrayed. A man who would one day learn that Lydia's love was far stronger than his lust...could she but find her way back into his arms again.

A thrilling historical romance filled with strong characters and the sweep of history.