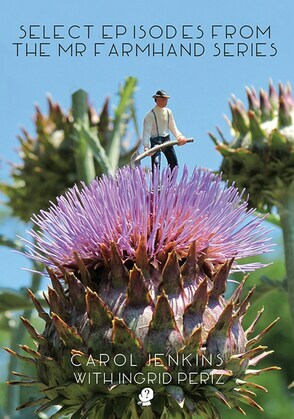 Follow the adventures of Mr Farmhand as he negotiates a rural existence in New Jersey, staving off the attentions of Mavis Eggwhistle, staying one step ahead of Frank Winkler and steering clear of Farmer Bart Brassica's pitchfork. His is a world full of unexpected dangers, from the odd satirical skirmish to the surprise philosophical poke in the eye, where gossip takes centre stage and life is lived on the margins. It's a tough gig, but somebody has to do it.

Select Episodes from the Mr Farmhand Series is perhaps the first literary work to feature instant polenta and dirty snow in the same sentence. It does not so much occupy a new literary genre as create one - an episodic play of pun-laden prose, each taking a seriously silly photograph as its point of departure. But better than that, it's funny. Carol Jenkins and her collaborating photographer Ingrid Periz have an uncannily absurd and whimsical eye.

Bringing the Select Episodes of Mr Farmhand into the Puncher and Wattmann stable is a coup, possibly even a chicken coup. Carol Jenkins lives in Sydney. She has two books published Fishing in the Devonian (2008) and Xn (2013) both from Puncher & Wattmann and shortlisted for the Premiers' Awards. Her collaborator Ingrid Periz lives in New Jersey and her most recent book is Robert MacPherson, The Painter's Reach (QAGOMA, 2015)