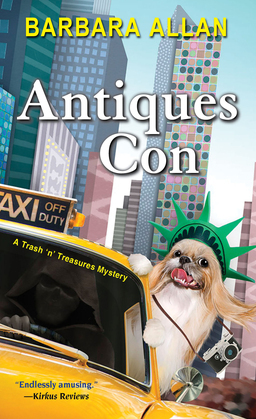 by Barbara Allan (Author)
Buy for $7.59 Excerpt
Fiction Mystery & detective Women sleuths
warning_amber
One or more licenses for this book have been acquired by your organisation details
A trip to a New York comic-book convention pits antiques dealers against a villain: “Brandy and her eccentric mother make a hilarious team of snoops.”—Joan Hess

Small-town Iowa sleuths Brandy and Vivian Borne—with their trusty shih tzu, Sushi—head for a Big Apple comics convention to sell a rare 1940s Superman drawing. When an intruder breaks into their hotel suite, their madcap Manhattan misadventure is only beginning. Soon the out-of-towners stumble onto a murder victim impaled by a pen-shaped award. Villains abound—from cartoonists to crime bosses—creating a jumble of clues. But Brandy and Vivian will leave no comic-book page unturned in their race to trap a ruthless killer.

“The exploits of the ditzy heroines remain endlessly amusing.”—Kirkus Reviews

“Fans of the series will enjoy the banter between this pair of engaging characters.”—Booklist