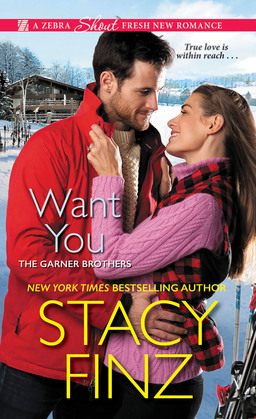 by Stacy Finz (Author)
Buy for $4.74 Excerpt
Fiction Romance Contemporary Contemporary women
warning_amber
One or more licenses for this book have been acquired by your organisation details
A woman finds a new job at an outdoor adventure company in California—where she’s torn between two brothers—from the New York Times–bestselling author.

The smart and sexy Garner brothers have turned Glory Junction into California’s hottest extreme sports town—and a thrilling adventure of the heart is always part of the deal . . .

The savvy CEO behind his family’s outdoor sporting empire, TJ Garner has his choice of women. But the only one he wants is way out of bounds. Deb Bennett has been his brother Win’s on and off girl since they were teenagers. And Deb’s still waiting for Win to quit fooling around and realize she’s The One . . .

Deb carves the ski slopes and rides the rapids like a champion—it’s getting her everyday life in order that’s the real challenge. When she turns to Win’s big brother for financial advice, TJ spontaneously offers the hard-working waitress an executive job at Garner Adventure. To Deb’s surprise, the job is a blast—and so is working for TJ. She always knew he was a heartthrob, just like all the Garners, but he’s charming and attentive too. Of course, given the choice between him and Win there’s no contest—or is there?

Praise for Need You