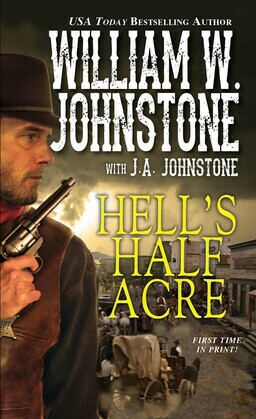 In this Western series debut,Fort Worth is the deadliest place on the Texas frontier. Good thing the new sheriff isn’t afraid to die—or kill.

“Stay the hell out of Fort Worth.”

Those were the last words uttered by the boomtown’s last sheriff. Rail-thin and half starved, desperate cowpuncher Jess Casey ignores the travel advice. Instead, Casey not only enters Fort Worth, he takes the dead man’s job. Now it’s up to him to keep the peace in a body-riddled slice of heaven known as Hell’s Half Acre—home of notorious outlaws like Kurt Koenig and his merciless gang.

For Koenig, the only good lawman is a dead one, and he puts a pretty price on Casey’s head. For Casey, that means war. Against him are the frontier’s fastest draw and a host of murderous triggers. On his side are decades of rock-hard Texas living, a couple of ne’er-do-well deputies, and the good sense to do all his talking behind the barrel of a fast-blazing gun . . .
Format
EPUB
Protection
Watermark
Publication date
January 31, 2017
Publisher
Pinnacle Books
Collection
Hell's Half Acre
Page count
336
ISBN
9780786035946
Paper ISBN
9780786039449
3149063
item