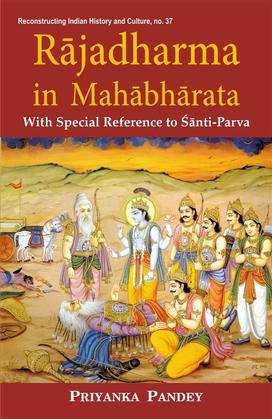 The idea of politics hardly finds an expression elsewhere as clearly as in Maha?bha?rata. This work thus investigates the political thought explicit in S?a?nti-Parva and emphasizes that Maha?bha?rata is a text in the study of politics, apart from the perception of it being a great epic and a text of high literary value. Whatever be the notion of politics we contemplate upon, it finds an articulation in Maha?bha?rata. As the Greek tradition of thinking is the base of Western politics, S?a?nti-Parva of Maha?bha?rata represents the Indian notion of political thinking, though there remain many similarities and dissimilarities between the two systems.

The book collects, analyses and examines the internal evidences from S?a?nti-Parva and also from other parvans of Maha?bha?rata to reach a decisive conclusion, making the work a composite result of textual analysis, related literature and subjective contemplation. It clearly shows that the idea of politics is not separated from the idea of ethics. Rather they are intertwined.

Dr Priyanka Pandey is an upcoming Sanskrit scholar with a penchant for serious researches on Indian classics. She got her PhD for the thesis, “Perspectives of Ra?jadharma in Maha?bha?rata: A Critical Analysis” from Jawaharlal Nehru University, New Delhi. This book Ra?jadharma in Maha?bha?rata with Special Reference to S?a?nti-Parva is an offshoot of her research project.

Dr Pandey has presented articles in many national and international seminars and has ten articles published in journals/books of repute to her credit.