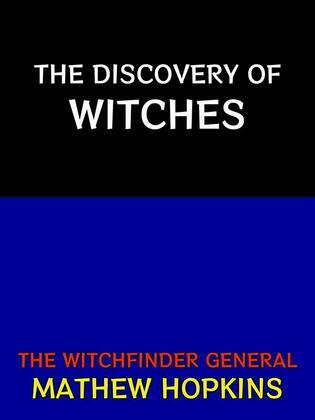 The Discovery of Witches

by Mathew Hopkins (Author)
Buy for €1.49 Excerpt
Nonfiction Reference Religion
warning_amber
One or more licenses for this book have been acquired by your organisation details

There was much superstition and ignorance in 17th century England. Witchcraft had been illegal since 1563 and hundreds of women were wrongly accused and punished. 'Proof' of being a witch could be a third nipple, an unusual scar or birthmark, a boil, a growth, or even owning a cat or other pet (a 'witch's familiar', or evil spirit). Confessions were often made under torture, and suspects were tied up and thrown into a river or pond. Floating was proof of guilt. After a show trial, the victim was hanged. Professionals who exposed witches could make a lot of money, as local magistrates paid the witch finder the equivalent of a month's wages. And the busiest tradesman of all was Matthew Hopkins, a shadowy figure who called himself 'Witchfinder General' and had around 300 women executed in East Anglia during the turmoil of the English Civil War in 1645 and 1646. The book shown here is from Hopkins's 1647 book 'The Discovery of Witches', in which he describes his grim profession.