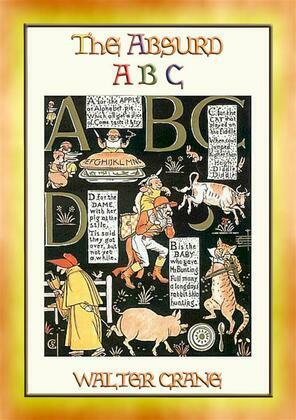 by Walter Crane (Author)
Buy for €1.49 Excerpt
Fiction Juvenile & young adult Themes Nursery rhymes
warning_amber
One or more licenses for this book have been acquired by your organisation details

The Absurd ABC is a satirical look at the world of Nursery Rhymes and Fairy Tales more aimed at adults than children.

One of the most creative periods in the history of children’s books took place in the second half of the nineteenth century. “Father of the illustrated children’s book”, Walter Crane, (1845-1915) was not only one of the most prolific illustrators in the Victorian era, but was also an artist and decorative designer in the fields of wallpaper, glass, ceramics, textile and interior design that still influences designers today. The subjects of many of Walter Crane’s books were nursery rhymes and fairy tales, and among his finest and most popular works were his primers and alphabet books. The Absurd A.B.C. was published in 1874, a time when Crane was at the very top of his form. In the preface to these books, Bryan Holme wrote that, “there could be no better way of learning one’s ABCs than through either of these books.”

The year 1863 was a vital turning point in Crane’s career, when he was introduced to Edmund Evans (1826–1905), a prominent English wood engraver and color printer, who was able to print a wide range of color schemes and popularize the production of illustrated children’s books. Evans employed Crane to illustrate covers for the publisher Frederick Warne & Co., in the yellow-bound Sixpenny Toybook Series. After 1866, Crane designed for publisher George Routledge & Sons’ Aunt Mavor’s Picture Books (later known as the Sixpenny Toy Series) and Shilling Series (later called Walter Crane’s Toy Books).

The Absurd A.B.C. features entertaining verses along with colorful illustrations. Crane’s designs were based on his observations of young children; he believed that good illustrations would stimulate children’s interest in reading books and help them to learn. Crane thus illustrated a set of English nursery rhymes along with comic touches, like the cow jumping over the moon and the cat playing the fiddle in the page with letters A, B and C. Most of his illustrations proposed that young children love seeing most things in profile and bright frank colors. He also suggested that children are not concerned with three dimensions, so his illustrations appeared as flattened representations, with figures as silhouettes with no organized spatial scheme.